A History of 3D 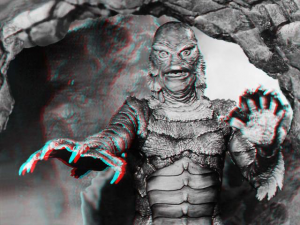 3D is back! Over the years, there have been several “waves” of 3D film production and distribution and it’s back again. Is it back for good or is this just another trend? Did you know commercial 3D movies have been around since 1922? In September of that year, the stereoscopic movie, “Power of Love” was released. The film used the anaglyph process which involves simultaneously shooting two views of a scene and printing each view in a different color. One layer is printed in a red color and the second one in green (later cyan). In anaglyph viewing, the audience uses 3D glasses with one red lens and one green lens to watch the movie. The red lens compliments the green view and the green lens compliments the red view.

This still may be the most common way to view 3D and is in fact the method that many 3D YouTube videos use to display 3D movies. Anaglyph viewing and in fact, all 3D, takes two images and tries to replicate the experience we all have when we look at objects with two eyes. Our brain combines the two views to create depth perception so that we know how far away an object is. 3D movies often exploit this by creating the illusion that certain objects are farther away than they really are and other objects appear to be moving out of the screen towards the viewer. 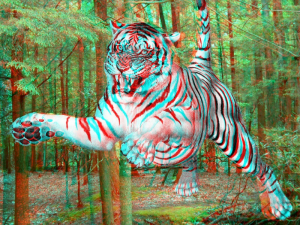 3D Anaglyph
3D, like most new technology faced some challenges. Often the incorrect setup of the projectors caused viewers to suffer from headaches. The other challenge the red/cyan anaglyph format faced was the transition from black and white pictures to full-color movies because the two-color process distorted the original colors of the film. As black and white film gave way to color, anaglyph 3D faded away. However, experimentation continued for several decades, but high costs and the pressures of the Great Depression prevented studios from wholeheartedly adopting 3D. One notable success story during the Depression was “Audioscopiks.” Like its earlier predecessors, this film relied on the red/cyan anaglyph format. “Audioscopiks” received an Academy Award in 1936 for Best Short Subject, Novelty Category.
In the 1940’s, World War II took center stage and stereoscopic photography remained on a backburner throughout that decade. But over time new breakthroughs in technology brought 3D back to the theatres. In the 1950’s, television created new concerns for the studios. The television had movie studio executives worried that it would steal their audience, so they promoted 3D movies as a way to offer audiences something that they couldn’t see at home on television. Many predicted that 3-D technology would do for movies what the “talkies” had achieved years before. Although red/cyan anaglyph movies were still around, new developments lead to the Polaroid 3D system called “Natural Vision.” The new Polaroid system used linear polarization, two lenses filming light-waves passing in perpendicular planes to each other.

The two images are then projected to correspond to the glasses. As each polarized filter passes only that light which is similarly polarized and blocks the light polarized in the opposite direction, each eye sees a different image. This launched a much better way to view color film in 3D. 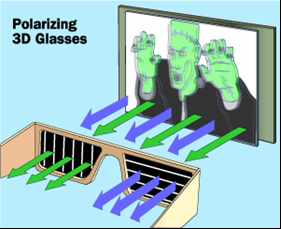 On Nov.26, 1952 Arch Obolers’s “Bwana Devil” premiered in 3D using this new technology which contributed to the film’s success. In fact the success of “Bwana Devil” and “House of Wax,” released a year later, caused a craze throughout Hollywood. Many of the major studios jumped on the bandwagon. Movies like “The Creature from the Black Lagoon,” “The Nebraskan,” and “Kiss Me Kate” were released in 3D. Unfortunately, even the prospect of Jane Mansfield’s ample chest being thrust out towards the audience was not enough to continue the craze. Many people still complained about 3D causing headaches. Often, theaters showing the movies had trouble setting the projectors up correctly, which only added to the problem. The studios also began to realize that in most cases, the two-dimensional versions often earned significantly more than the 3D versions. So once again, the process faded quickly. However, there was a belief that 3D still held great potential and that it was just a matter of time before the technology advanced to make 3D the multi-billion dollar business it is today. Please check in later for the next installment of “The History of 3D part 2”